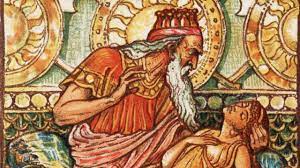 King Midas was a mythical ruler of Phrygia in Asia Minor. Phrygia was located in central Anatolia in what we now call modern Turkey. Midas’s legendary fame is based upon his ability to transform everything he touched into gold. This magical ability was bestowed upon Midas by the god Dionysus. This is a Greek myth involving the ancient Greek pantheon of gods. Human beings have long valued precious metals and gold in particular. The Midas touch is superficially considered a great boon for those blessed by its extraordinary benefits. Even today we live in a world where wealth is highly sought after and for many their primary aim in life. Midas: The foundation myth has much to offer us, even, today.

In the ancient world riches were greatly valued by many, especially those who lacked them, but there were other qualities equally recognised as of the highest order. Glory via courageous acts is probably rated more highly by the Greeks and Romans. Ancient philosophers and writers had mixed feelings about the super wealthy in their midst. In today’s world, in our consumer driven society, we are more fawnish over the very wealthy. Our world offers far fewer places for glorious acts of valour within the normal span of a life. Midas is probably more popular in the 21 C than he would have been back in the day a few millennia ago.

We live in a time where everything is being commodified. That is everything is for sale. The commodification of sex is not a new occurrence (the oldest profession) but the extent of it is now ginormous. Love is for sale via internet dating. So, the evolutionary impulse underpinning the urge to love and procreate has been corralled by commerce to benefit the merchant spirit. Midas has touched us in some of the more intimate places. The ancients greatly valued virtue according to the surviving writers like Virgil and Aristotle. The consumerist society puts a price tag on everything. Therefore, things turn bad for Midas when the full realisation of having everything he touches turns to solid gold. His horse suddenly solidifies into hard gold beneath his touch. Water and food become gold and starvation beckons. His bedding offers no respite as it hardens into gold beneath his head. Great riches to the exclusion of all else is no longer mere fantasy but a serious dilemma.

The moral of this story tells us that materialism to the exclusion of all else makes like hard and devoid of life. Be careful what you wish for and what you focus your energies upon. There are softer things in life which are best served not being costed and treated merely as assets. Nourishment is provided by more than just things that money can buy. Relationships are not bought and sold if you want to outlive your dependence upon material prosperity. Midas has much to teach us in the 21C. Midas: The foundation myth is a cursory tale about the dangers of materialism. King Midas goes back to Dionysus and begs to be relieved of his extraordinary touch. A modern equivalent could be the super salesperson who realises that all of his or her relationships have been bought and sold. Midas had to embark on a journey to find a sacred river to wash off his golden touch before he died of starvation and thirst.

So, beware of desiring material success too much. You may lose your ability to recognise the non-material value of aspects of your life.  The commodification of sacred things like love and sex represent real dangers to the fabric of our society and to the integrity of our individual hearts. Midas copped some asse’s ears from Apollo for adjudging Pan the better musician than Apollo himself. King Midas must have had plenty of moxie and probably lived on the edge of hubristic intent. Midas Word bears the tagline Speak Truth, which informs our copywriting and content creation with a commitment to communicating the essential truth. A golden touch with words must be wielded with integrity and great care. Telling lies in the guise of marketing has never been our bag. Content marketing is fundamentally devoted to utilitarianism and providing useful information.