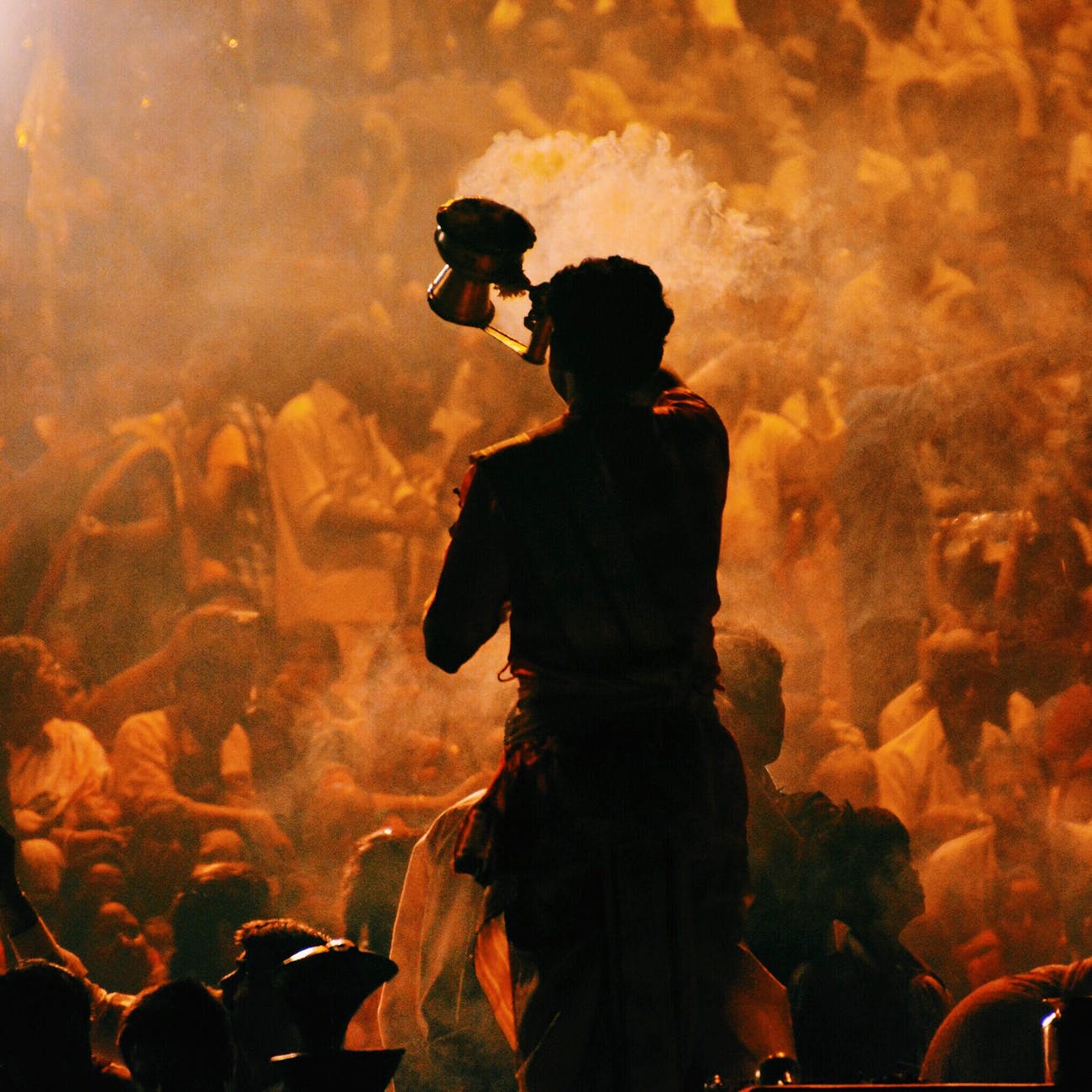 There we were minding our own business and suddenly folks were hearing voices inside their heads. Why did god bother us? According to the stories you had blokes building bloody big boats and others threatening to murder their own kids, all in the name of some so-called divine source. Human beings had journeyed for billions of years from single cell entities to multicellular, then, to mammals to primates, but of course were not equipped to remember such deep time events. So we made up stories to populate our own shallow-time historical concerns with important people and a god to top it all off with.

Of course when armed soldiers tell you to do something in the name of the king you do it or suffer the very real and bloody consequences. Religion was at the beginning not a free choice but a compelling order, which defined your place in the community and kingdom.

Or Did We Actually Bother God?

You see the idea of a god came to those at the top of the greasy pole in the power stakes. Those individuals invested in controlling others and getting the choicest bits at the banquet of life. These aristocratic chaps divided up the top jobs around the king, with the priesthood being those in the van between god and god’s anointed one, the king. God was an immensely useful concept for kings and the aristocracy to keep the peasants and plebs in line. You see a divine presence can see you when you’re sleeping and watch you at all times through walls and gaze into your very soul. The thought police, no less, banging around inside your head. God really came to the fore at times of war. This is because soldiers knew that there was a good chance that they would be killed or badly maimed in battle. A belief in a god that was on the same side as your king imbued these chaps with some much needed fervour when charging into battle against the enemy. Historically, the whole god thing is firmly embedded in the bloody power and land grabs of those who wear the shiny crown. Christianity stepped up a gear when Constantine in the fourth century CE chose this obscure Jewish hybrid cult to be his divine weapon in his battles against those competing for control of the Roman Empire. The victory of his forces under the banner of the Christian god gave a massive leg up to this fledgling religion.

Reasons For Believing In Invisible Entities

This is but one example of many pragmatic uses that the god concept has been put to by human beings in the struggle for power and status.

Understanding exactly, why did god bother us? Is deserving of a closer look if you want to get at the meat and bone of how humanity goes about its business around the globe. There is Islam and the dangerous few of its hard-line adherents who strap bombs to their bodies and blow them up to cause maximum damage to targets including mass gatherings of seemingly innocent people. There are Christian warlords in Africa who train children to murder their parents and whomever gets in the way from then on. God serves a useful purpose for many who wish to dramatically alter the status of the haves and the have nots. The belief in a particular god or divinity sets apart those who harbour it from their enemies. This idea inside the head of the believer overrides any sense of shared humanity it seems. Even those who are from the same racial group and look alike on the outside are separated by belief. This faith or belief in an invisible entity, who has never been verifiably seen, propels people into committing heinous actions against their fellow human beings.

God in this format supports those who wish for a small world, where everyone in it holds the same beliefs and attitudes. There is no room for diversity in this sense of religion for those Christians, Muslims, Buddhists, Hindus, Sikhs, Mormons, Jews, Jehovahs, Adventists, and all the rest of the god botherers who want a non-diverse world around them. Many who are concerned at the fundamental flaw within those religious adherents who espouse non-acceptance of diversity and pluralism think that perhaps humanity has a biological propensity for this kind of behaviour.  Whether it be religious or racist persecution of individuals who do not fit the mould within a community or country. I often think that the Jesus of the Gospels would not want to hang out with many of the folks who claim to be his followers. The imaginary character of the Nazarene has been crafted and polished by legions of church leaders since the time of Constantine and Eusebius. In all of these religions there is very little, or nothing left of whatever may or may not have been there at the beginning. The same is true of the Koran and the life of Mohammed. Believers bang on about following the word of the Bible or Koran or Talmud and ignore the fact that these texts were written by human beings with an investment in how these stories are perceived.

We all love a good story, and this is what religions are based upon – narratives designed to capture the hearts and imagination of children. Religious instruction is always begun at the earliest age wherever possible. Religions are heavily invested in the education business around the globe – why do you think that is? People send their kids to schools run by religious organisations, even when the parents are not great believers themselves. Why? It is because they think that the moral code so espoused by these religions will endower their child with a sound foundation for life. The various religions have spent centuries promising a better life in heaven for those who believe. The message may have become less strident in recent decades but a millennia of history has set down core beliefs underpinning our cultures and civilisations. Science may have usurped our understanding of how the physical world works but it has not come with its own creed. There is an empty hole in the lives of many who wish for a strict moral compass laid out by a priesthood to be followed. There remains this uneasy truce between the rational realm of scientific knowledge and the irrational world of belief, myths, and biblical stories. What is the truth? Ah that is a tricky question to answer for many parents when bringing up their children.

God bangs on the door of consciousness when we near the end of our allotted time. Once again all those stories we were inculcated with as children rear their heavenly message if you believe. Nobody wants to be cast into hell or nothingness willingly. Therefore, many return to the church or temple in their final years. This is why you see so many old people at church and religious services more generally. It is safer to have a bet each way in the end. The rational human beings knows that there is no supernatural entity running the show, in the sense that all these religions would have us believe. The church and all these religions cut their teeth on the ignorant fears of human beings a millennia or two ago. Sudden deaths and tragedies delivered a constant stream of people looking for answers, as to what it all means and some consolation from the sadness and pain of being separated from loved ones. Human beings came up with answers that were suitable for the Bronze Age, and these were noted down in scrolls and codices. These were purported to be derived directly from god and countless generations of belief sealed the deal in this regard. Honour thy parents and honour thy ancestors. These texts were rewritten and updated in new languages over time – and yet are still considered to be the word of god verbatim. The ignorance of ordinary human beings is breathtaking. We believe in the face of overwhelming scientific proof to the contrary. The average person is no font of brilliance, they are just simple folk, easily led by tradition and indoctrination. They are still loveable and nice in the right circumstances, however.

Belief is tied up with identity. Who you are and who you consider yourself to be. Your tribe, your family, and your community are often connected by the belief in an invisible god. We cannot see your god, but we can see how your belief in this entity makes you look and act. Culture, customs, and beliefs are all driven by a hodge podge of attitudes and traditions. Your behaviour and what you consider to be the norm is defined by all these things. Whether you wear a head scarf or long sideburns. Whether you talk in tongues or go to church on Sundays. Whether you feel free to be involved in a same sex relationship or not. Whether you can eat certain foods. All of these things can be constrained by religious belief. How many times you pray per day. How you pray. Do you worship as a mixed gender congregation or are you separated by sex? Evangelical Christians worship a blue eyed white skinned Jesus hell bent on material success. Talk about talking in tongues. Why did god bother us? Why were diverse human beings created in the first place if all these religions want everyone to act and look the same? Belief and religion are a conundrum in the modern era. There we were minding our own business…

Robert Sudha Hamilton is the author of several books including