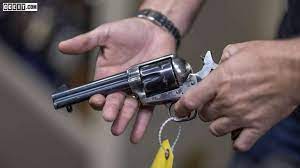 The terrible tragic death of cinematographer Halyna Hutchins at the hands of a prop gun is a timely message to an unhealthy industry. There are too many guns seen on the screens showing Hollywood films. Writers and directors seem to have an obsession with creating stories featuring guns and gun deaths.

Whether the industry is being funded by the gun lobby is a moot point. The celebrity realm is peopled with actors who make their make-believe livings shooting and killing characters on screen. It may just be entertainment but with human beings spending ever more time in front of screens it sends a message and makes an impression on viewers. This real Hollywood gun death hurts the industry and might send a message to the movie makers.

Let’s Stop Revelling in Crap Via Our Entertainments

Western democracies seem to revel in crap, with their citizens spending large amounts of their time indulging in entertainments telling sensational stories involving gun violence. Many people work in jobs, which offer little intrinsic meaning, like the gig economy. The demise of organised religions, although a good thing in many ways, removes meaningful frameworks in many lives. Millions of lives are left bereft of inspiration and aspirations toward higher ground. Education remains a beacon for self-improvement through learning. Discovering the meaning of life in the 21C is no easy thing. People are looking for answers in stories. Hollywood is like a lolly shop shovelling out sugar laden offerings to a public made up of children and young adults. Isn’t it time for this industry to start taking some responsibility for the content it serves up to a world needing something more than sensationalist crap?

Guns make killing human beings easier. Massacres occur in a matter of minutes due to the technology inherent in automatic weapons. Movies that revel in gun violence on big screens are not helping our world. Actors that make celebrated livings from portraying characters involved in stories depicting gun violence are doing us all a great disservice. Writers who continue to tell stories featuring gun deaths and violence are letting us all down as a community of human beings. Producers who want to make these movies are similarly complicit in this unhelpful activity. Nobody can deny that there is a glut of violent films and TV on our screens. It has been so for many decades and the childish appetite for smash bang shoot em up scenes shows no sign of abating. The movie business seems to be a very immature affair. It is easier to tell stories with gross actions and violent scenes than anything nuanced.

This real Hollywood gun death might send a timely message to the movie industry about its preoccupation with violence. Alec Baldwin has made a celebrated living portraying characters involved in gun violence. Americans and guns – it is time to grow up and put away these deadly toys. Guns do kill people easily, too easily. American society needs to grow up and rein in the orgy of violence. The claims that movies reflect the reality or dreams of a society are way out of line here. The infantile obsession with crash bang violence depicted in American movies is dangerous and needs to be tempered, if this civilisation is to survive going forward. Guns have no place in human society. Guns are not the answer. Violence is not a smart move in any circumstance. Human beings will not continue under the aegis of the gun.