On top of this it has a number of decided advantages over the paper book. Firstly, the absent bulk and weight of the ereader over a large novel is really noticeable, especially after prolonged reading sessions. You know, when you are reading a great book and are totally involved in the unfolding story but your wrists are aching, and you are doing yoga to find bodily positions which will lesson the strain of the weight of the book on your arms and wrists. The ereader removes all this physical stress, which can take away your focus on the story at hand. 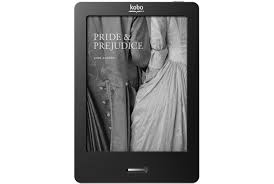 Another ereader advantage, which I noticed when reading Tolstoy’s War and Peace, was the way the single screen format kept you in the moment, focused on the text that you were reading. The large paper book forces you to be aware of how much you have already read and how much you have to go, because you can see and feel all those pages in your hands. The ereader contributes to keeping your experience of the writer’s prose as fresh because there is only a readable chunk of it on its screen, at any one time.

I also would probably have not read War and Peace, without my ereader because although I knew it was a great book I doubt that I would have bought it in a bookstore. It was free through Amazon and Kobo, along with a host of other classic titles, which I have now read. Gibbon’s Decline and Fall; Madame Bovary; Of Human Bondage; Heart of Darkness; The Strange Case of Dr Jekyll and Mr Hyde; and many more. My ereader helped me read some books that I am very glad that I made the effort to read; that is technology doing its job in my opinion.

Ereaders are cheap to buy,  a pleasure to read, long lasting and provide instant gratification, when you have just read a great book and want to immediately read that author’s next book or instalment of the same story you just press a button and you have it like magic. The books themselves are cheaper to buy and you don’t have that sinking feeling when you move house and have to box up hundreds of very heavy books!

Get an ereader – you will love it! 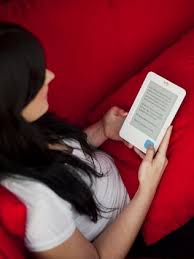 Lastly, let me share a secret with you about how I made the decision to buy an ereader. You see, I grew up in a family who owned the best bookshop in our city, it was called Wisdom Books. I used to work in the bookshop at various times over its twenty five year history and loved being around all those wonderful books. Books and the knowledge that they sometimes contain, have always fascinated me and attracted me. Well, Wisdom Books grew from a small bookshop into a much larger bookstore but still maintained that special bookshop flavour.

Eventually in the face of outside economic forces, the Australian dollar was floated and became very poor in its buying power of US and UK books, with US books costing double and UK books triple in Australian dollars. Wisdom Books was an importer of quality overseas books, which were not published by Australian publishers, and had been very popular with its customers on this basis. To compound this substantial increase in the cost of these books to our buying public the Australian Government brought in a goods and services tax, which put the price of books up a further 10%. However, as is still the situation today, books bought online through Amazon etc do not pay this tax. Many family bookstores in Australia went to the wall and were forced to close their doors.

My brother, who had taken over from my father, as the bookshop’s manager, was understandably livid at the unfairness of the GST impost. It was my brother who had the frustrating and sad task of overseeing the demise of this once great bookstore. You can imagine his feelings about Amazon and the unfair playing field. Australia was growing up, economically, through the nineteen eighties and nineties, becoming a part of the global market. Economists, and Paul Keating in particular, the Australian treasurer and PM,who we all admired politically at the time, kept telling us it was good for the nation. Watching something beautiful die is always hard to do, even a business.

Anyway, the secret is that, a while after the dust had settled, shop fittings had been sold off and the pain of just walking away, after twenty five years of business had receded somewhat. My brother shared with me that his partner had bought him an Amazon Kindle ereader and that he was really enjoying it. I was gobsmacked and I eventually went out and bought a Kobo ereader myself.