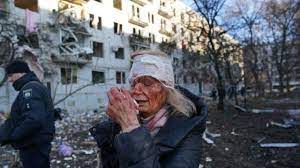 The drums of war are loudly beating. Vladimir Putin has sent his Russian forces into Ukraine and, we in the West, are watching another media fest on our screens. The Queen is unwell with Covid-19, and she is now a frail old lady. Scott Morrison is hoping that dramatic world events will distract Australians from his government’s poor performances and his lies. Here on the east coast it is endlessly raining in a La Nina weather event. The global pandemic seems to be subsiding into its endemic phase. Totalitarian regimes have been weighing up their options and the balance seems to fall on the side of invasion in Russia’s case. The war mongers among us, are chomping at the bit.

Guns Vs Money Over Ukraine

The West and the USA appear weak, after the Afghanistan Taliban debacle. Joe Biden looks like a shuffling old man, but I am very glad that he has replaced Trump just the same. Guns vs money is the conflict on the table right now. Russia wants its Soviet Union territory and might back. Putin has his forces on the ground and fighting. The West is weak in the eyes of its hardline opponents. Will China launch a military invasion to take back Taiwan? The pandemic has unsettled the henchmen in these regimes and given them ideas about the instability of the current world order.

When the dogs of war are launched it is hard to get them back under restraint. There are always men who smell weakness in the air and deal with their own insecurities by advocating aggression and attack. Powerful leaders of regimes are continually in a state of fear and anxiety about their position in the pecking order. Only the hungry wolf stays on top of the pack. Putin’s lies to the world in the lead up to the invasion of Ukraine reminded me of Mr Hitler’s similar strategy in his communications with Neville Chamberlain and other European leaders in the months before WW2. Stalin’s lies prior to signing the non-aggression pact with Hitler is another shining example. World leaders lie all the time, it is part of their political DNA, it seems.

If you listen to Ukrainians this war with Russia had been going on since 2014. It has moved into different phases but there has been a continual intention on the part of Putin to reel this breakaway state back in. There has been a campaign of disinformation and destabilising cyber-attacks on government institutions. Militias in the east have kept up military attacks. Russia wants its empire back and Putin is its latest Tsar to tread in the footsteps of the great’s Catherine and Peter. One wonders how the ordinary Russian feels right now. The lies and disinformation fed by politicians to the populace may have paved the way for less dissent. Even in Australia, we know about lying leaders and politicians.