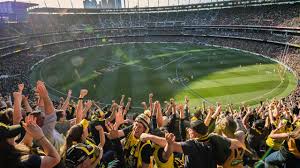 Watching the North Melbourne Kangaroos play the Western Bulldogs on Good Friday answers that question – why we need relegation in AFL. Footy pundits in the media sounded off in the lead up to this game about how the Kangaroos needed to be competitive in this stand-alone Melbourne game. They urged their fans to attend this match or risk having it taken off their club. We want to see plenty of effort, the Greek chorus rang out pre-game. Well, effort was there, in my view, but the skill level displayed by Kangaroo players was appalling. Bulldog pressure, obviously, had something to do with the myriad of errors and clangers committed by the young North Melbourne team.

Footy Fans Do Not Want To Watch These Uneven Contests

However, watching this contest was painful unless you were a Western Bulldog fan. I hear the refrain, the Kangas are in a rebuilding phase, repeated by AFL commentators. Well, let them rebuild elsewhere and not centre stage on my TV please. Footy fans do not want to watch these uneven contests and definitely not a whole year or more of them. Relegate the bottom 2 clubs each year and promote 2 wannabe AFL clubs from the second tier VFL or from a play off from the top clubs in the SANFL, WAFL, VFL, Tassie etc. Let’s give some new blood a chance at the highest level.

Decades of Cellar Dwelling Clubs a Thing of the Past

The AFL would need to have a fund to inject funds into the successful promoted clubs, similar to what happens in the Premier League in England. I think fans would rather observe the novelty of new clubs having a go than perennial underachievers like North Melbourne. Decades of cellar dwelling performances by AFL clubs would be a thing of the past. Fresh energy and new names would be introduced into a great national competition. Clubs like the Kangaroos that have been struggling for years would be able to regather their competitive edge in the second tier. I am sure that they would re-emerge back into the top tier when ready to climb the ladder.

Why we need relegation in AFL is for the fans. Some fans spend lifetimes supporting struggling clubs and what does that do for their self-esteem. Isn’t it better to support a club winning the VFL premiership than getting splinters from the AFL wooden spoon holders every year? The young players who play for struggling clubs like North Melbourne are scarred from the experience in many cases. Plenty have their careers destroyed and drastically curtailed by joining clubs like these. Relegation is the creative solution, as it provides more opportunities for more clubs to join the fray. Bring it on AFL and do us all a favour.